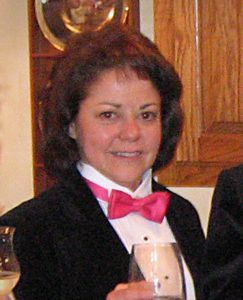 Everyone attending the induction banquet is already familiar with the major contribution Gail Langan has made to Hall of Fame activities: she has been producing the induction video features since 2011. She also conceived of and produced the videos for Buglers Hall of Fame induction ceremonies from 2010 to 2012. She has conducted video interviews with prominent drum corps personalities. She is a founding member and board member of the Drum Corps Experience virtual museum, which debuted online earlier this summer. From 2010 to 2015, she handled public relations for Park City Pride Alumni. Gail Langan played lead soprano with ND-ettes drum and bugle corps (Notre Dame Girls High School) in Bridgeport for five years, winning four major championships: the 1969 and 1970 World Open All Girl Championship; the 1970 U.S. Open All Girl Championship and the 1970 Greater New York Circuit All Girl Championship. The following year, she was assistant brass instructor with ND-ettes. She played soprano and mellophone with Park City Pride Alumni from 2004 to 2011 and more recently played mellophone with St. Rita’s Brassmen Alumni.