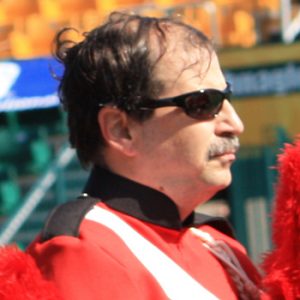 Frank Rogers received the Lifetime Member Award from New York Skyliners in 2004 for contributions that began as a baritone horn player in 1976. Over the following years, he served as visual tech and in various business management positions. Since 1996, he has served the Skyliners Alumni drum and bugle corps as a board member, visual designer and instructor. He was visual tech for two Division 3 DCI corps: the Cadets of Brooklyn and Spirit of Newark. He has marched in both Skyliners and Skyliners Alumni mini corps. His drum corps activity began in 1967 when he played baritone horn with Our Lady of Angels Blue Angels. His long list of championships includes: Blue Angels, Long Island Circuit champions in 1973 (undefeated) and 1974: Cadets of Brooklyn, Garden State Circuit Division 3 champions in 1998; Skyliners DCA Class A champions in 1999 and 2002; Brass Menagerie, Buglers Hall of Fame Garfield Regional Ensemble champions, 2012.