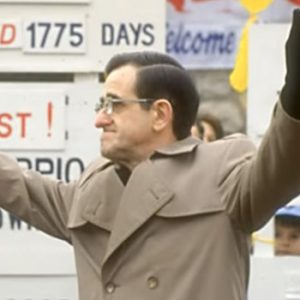 Joe Cicippio’s drum corps career began in 1940 when he joined the Nuss-O’hara-Todd Junior Drum and Bugle Corps in Norristown, Pennsylvania at the age of nine. He was immediately drawn toward playing the snare drum, a choice that would prove monumentally important at a very significant point later in his life.

He also marched in the Nuss-O’hara-Todd Senior Drum and Bugle Corps along with several veterans from World War I and returning World War II veterans until 1948. The Nuss-O’hara-Todd Junior Corps then changed names and became the Invaders, under the direction and instruction of Hall of Fame member Bill Mitten and Joe Mountain. Both men were responsible for instructing horns, drums and marching and maneuvering (M & M). He served as the original drum major for the Invaders and in 1951, at the age of 21, accepted Bill Mitten’s invitation to join the Reilly Raiders, playing tenor drum. He also accepted a position as an M & M instructor for Hattle-Taylor Post Junior Corps also based in Pennsylvania.

He marched with Reilly until he was drafted into the United States Army in September, 1954. He served until 1956. When he returned home, he joined the Invaders Alumni Corps for about one year, since with one child and another on the way, he was needed at home.

He has a very impressive resume in the world of business. He worked in the banking industry for more than 25 years from 1948 until 1974. Between 1975 and 1978, he served as Assistant to the President of Carson Helicopters in Saudi Arabia. Upon completion of this contract, he was asked to stay on and head up several of companies outside the Middle East with operations located in London. From 1984 until 1986, he served as Comptroller of American University of Beirut and Medical Center, located in Beirut, Lebanon.

An amazing and terrifying aspect of his life occurred on September 12, 1986 when he was abducted by Shiite Muslim kidnappers at American University. He was held hostage and subjected to numerous physical and psychological atrocities at the hands of his captors for more than five years until he was finally released on December 2, 1991.

“One of the things that helped me to get through this horrible ordeal was the use of percussion drills and rudiments that I had learned with the Reilly Raiders,” he says. He adds, jokingly, “I am the best two-fingered drummer in the world,” as he demonstrated on the table in front of him, using his two index fingers as “drum sticks.” “This was the best thing that I could do to get through this difficult experience,” he says.