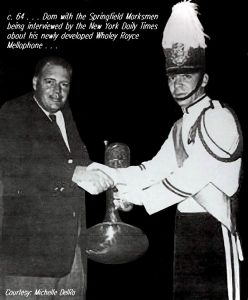 Dom DelRa started playing baritone horn with the Empire State Grenadiers, Cohoes, New York at the age of 15. He received his Bachelor of Professional Studies in Music from Empire State College in 1978. He taught and arranged music for the Grenadiers, Interstatesmen, Marksmen, Hawthorne Caballeros, Syracuse Brigadiers, Pittsfield Boys Club, The Islanders, St. Lucy’s, St. Vincent’s and the Avant Guard. The Key of G Mellophone Bugle was made to his specifications by the Whaley-Royce Ltd. of Canada in 1963/64 and was used on the field for the first time in 1964. Dominick wanted an instrument that could produce the sound of a French horn in a middle-soprano register. He tried something with the Interstatesmen, playing a baritone horn with a soprano mouthpiece at the end of a show in 1963. Then he put together, using the body of a cornet, a large metal funnel, copper tubing and a valve /rotor from a soprano horn, the prototype, G Mellophone bugle. He spoke with a Whaley-Royce representative giving them the specifications and the Mellophone G Bugle was born. The Interstatesmen and the Marksmen were the first corps to get the Mellophone and he was able to complete his unique sound.