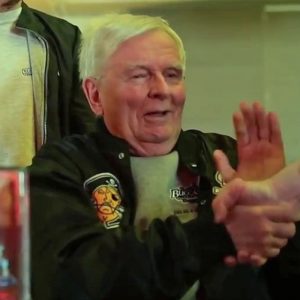 Bruce Englehart is a charter member of the Reading Buccaneers, one of five people who worked together to form the corps in 1957. His first drum corps experience took place years earlier, in 1946. He had already been taking trumpet lessons for four years when he was accepted as a member of the Kenhorst Cadets junior drum and bugle corps, a well-known local parade and competition unit sponsored by the fire department. He then played solo soprano with top-ranked Temple Cadets from 1948 until 1952. The Temple Cadets disbanded after about seventy-five per cent of its members were called by the military to serve in Korea. After serving in the United States Navy for four years, he and other former members of corps in the Reading, PA area organized the Buccaneers. For many members of the new group, it was a hard transition from award-winning junior corps to struggling senior corps. He played solo soprano with the Buccaneers for 17 years. He assisted drill instructor Bud Johnston from 1959 to 1970, served as corps vice president from 1960 to 1964 and was co-chairman of the Big Sounds in Motion contest committee from 1966 to 1969. In 1986, he repeated his initial duties with the Buccaneers, becoming the founder and charter member of the Buc’s alumni association and alumni corps. He still plays lead soprano in the alumni corps.