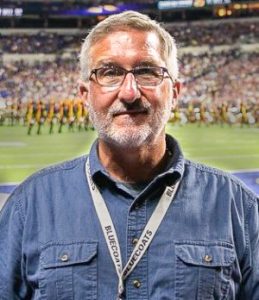 Bill Hamilton first joined the Bluecoats of Canton, Ohio in 1972 as a soprano horn player. He’s been with the organization ever since, devoting 48 years to the same corps. Over that time span, he has been an instructor, held various administration positions and still found time to be a DCA brass judge in 1997. As Bluecoats began to rise higher in competition, he recognized that his full-time job as a band director prevented him from devoting the time needed to help the corps continue to move up. In 2003, after 10 years as corps director he worked with the board directors to find a candidate to replace himself. In the time since he has worked alongside director David Glasgow, providing guidance and support. He was program coordinator in 2004 and 2005 and has served as corps manager since 2006. He began to instruct the brass section in 1983, shortly after the corps almost folded because of financial problems. He was brass instructor in 1987 when Bluecoats became the first Ohio corps to make the Drum Corps International (DCI) championship finals. The corps then missed the finals only once before the Bluecoats won the 2016 DCI championship. Moving on to the administrative side of corps operations, he was tour coordinator in 1992, corps director for 10 years when he shifted gears again to support his replacement in the administration structure.