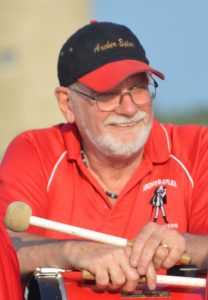 Bill Ives has amassed thousands of items and hundreds of vintage uniforms in his efforts to preserve the history of drum and bugle corps activity. Inducted as an associate member in 2018, he has been a key figure in the movement to preserve the history of drum and bugle corps activity. He has amassed a staggering 24,000 items: memorabilia, souvenirs, programs, newspaper and magazine articles, corps buttons and badges and more than 350 vintage uniforms. These items are stored and available for viewing by appointment only at the Archer-Epler Veterans of Foreign Wars (VFW) Post 979 in Upper Darby, Pennsylvania. For the past 20 years he has displayed many of these items regularly at drum corps events in the United States and Canada. He has also created a detailed computerized listing of drum corps in the USA and Canada. He has served in various committee and management positions with groups including Jersey Surf and Archer-Epler Musketeers. He has marched in various color guard positions and played bass drum with the Musketeers. He was named Musketeer of the Year in 1982; received the Spirit of the Musketeer award in 1996; was named Drum Corps International (DCI) volunteer of the year in 2011. He is a member of the Pennsylvania Drum Corps Hall of Fame.