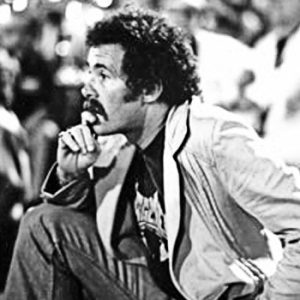 Bobby Hoffman brought a new level of creativity and a zany sense of humor to drum and bugle corps field show activity over more than 20 years of show design before his passing in January 1991. His unique new approach to show design was perhaps best exemplified by the Bayonne Bridgemen when he served as show designer, coordinator and marching instructor from 1976 to 1982. He was also director of the Bridgemen from 1978 to 1982. Earlier in the 1970s, he handled both show design and marching instruction for such well-known junior corps of the time as Garfield Cadets, Anaheim Kingsmen and Blue Stars of Lacrosse, Wisconsin. In the years following his activity with the Bridgemen, he brought his special blend of show design, show coordination and marching instruction to the west coast, working in California with Valley Fever of Fresno and Velvet Knights of Anaheim. During his years with New York Skyliners in the early 1970s, he introduced the visual depiction of a New York City style traffic jam on the contest field, one of the most crowd-pleasing, clever and effective pieces of show drill of all time. He was also a percussion pioneer. He introduced timbales while performing with the Hawthorne Caballeros drum line in 1961. The sound of the two relatively high pitched small drums mounted on a carrying harness helped create a Latin percussion sound that corps members, judges and audiences all loved to hear. Before joining Hawthorne, he played tenor drum with three New Jersey junior drum and bugle corps: the Ravens of Bergenfield in 1956 and 1957; the Dumont Police Cadets in 1958 and 1959 and St. Ann’s Cadets of Fairlawn in 1960.