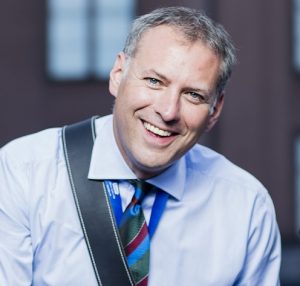 It’s no secret that organizer and director Erik Julliard has produced one the best drum corps in the world: the widely popular and admired Top Secret Drum Corps of Basel, Switzerland. He will be inducted into the World Drum Corps Hall of Fame as the 2018 winner of the President’s Lifetime Achievement Award.

Top Secret originated in 1991 when seven talented local drummers founded the group to play more than traditional carnival drum marches. The annual carnival named “Fasnacht” showcases Basel’s rich drumming tradition. It’s estimated there are more than 3,000 drummers active in the city at any given time.

Basel drumming style is adapted from military drumming exercises and drills dating back to the Middle Ages. This serious traditional style is often used to accompany traditional Swiss marching tunes. Top Secret retains some of the military nature of traditional Basel drumming but adds an upbeat, humorous tone with routines that may include Latin rhythms, stunning visual effects such as drummers dueling, tossing, juggling and twirling sticks, flagpoles shooting fireworks, other lighting effects and intricate marching routines. Although Top Secret wears 18th century style military uniforms and displays the precision of bands of the Swiss army, the group is not affiliated with any military unit. Members, most with regular day jobs, are highly motivated, practicing almost every day of the year to achieve the high performance levels.

There hasn’t been anything secret about the group, enlarged from the original size to permit a marching show, since its first performed at the Royal Edinburgh Military Tattoo in Scotland in 2003. Top Secret was one of the first non-military, non-British Commonwealth units to perform on the Esplanade at Edinburgh Castle. Top Secret returned to Edinburgh in 2006, 2009, 2012 and 2015.

Under Erik Julliard’s leadership, Top Secret helped found the annual Basel Tattoo in 2006. His organizational skills, creativity and emphasis on perfectionism have given military music a new look. Under his direction and choreography, music groups from around the world inspire the Basel audience. Top Secret’s appearances around the world help him cultivate relations with many other music directors and event organizers.

Over the past 15 years, Top Secret has travelled the world to perform across Europe, the United States, Australia, Canada and South Africa. They are featured in a Swiss television documentary film recounting their rise to world fame through exposure at the Edinburgh Tattoo. In 2016, the drum corps performed during the spectacular 90th birthday celebration for Great Britain’s Queen Elizabeth II.