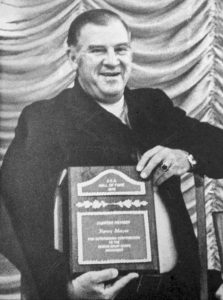 ‘Lefty’ Mayer joined the Charles W. Heisser senior drum and bugle corps as a drummer to begin his drum and bugle corps career. In 1951, he became business manager for the Garbarina-Mazarakos Skyliners. For the next 25 years, he served as either business manager or director of the New York Skyliners. He was a driving force in organizing Drum Corps Associates (DCA), the organization formed to allow senior drum and bugle corps in the United States and Canada move away from the control of the American Legion (AL) and Veterans of Foreign Wars (VFW) organizations. He served as the inaugural president of DCA.