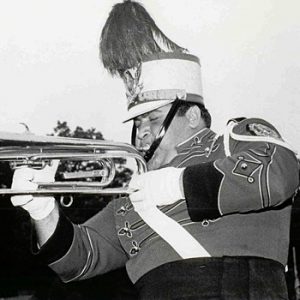 Robert Notaro, better known to friends and fans in the drum corps world as Pepe, started his long career in drum corps with Our Lady of Mt. Carmel Church in Brooklyn in 1949, at age 9. Carman Cluna handed him his first horn: a United States Army regulation bugle with no pistons and no slide. After playing with a number of junior corps in the New York City area, he became a highly popular French horn soloist with New York Skyliners. He also instructed junior and senior corps throughout the New York area for many years. He suggested that Great Alliance of Seniors (GAS) reunions schedule “talent shows,” which originated as a few solo performers and small ensembles and have become day-long events during GAS reunions. He was a strong supporter of Drum Corps International (DCI) Class A and A-60 (which later became Division II and III) drum and bugle corps, which allowed smaller corps to compete at regional and national events. More than any other activist, he opened the door so that all junior corps, regardless of size, talent, maturity and goals, had a place in the activity.