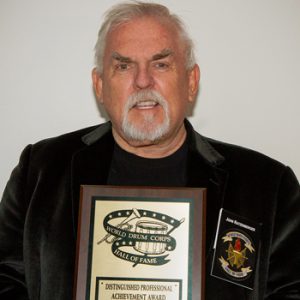 John Ratzenberger was a familiar figure in North American households from 1982 to 1993, when he played know-it-all mail carrier Cliff Clavin on the television situation comedy Cheers. Since then, he has voiced characters in every animated Pixar film. Beyond his acting career, he speaks on behalf of American manufacturing and job training.

He grew up in the Black Rock section of Bridgeport, Connecticut. His experience playing in the drum line of the St. Ann’s Loyalaires drum and bugle corps as a boy provided important performance training that he applied later in his career.

He began acting while a student at Sacred Heart University. After graduating from college, he worked as a carpenter as he started his performing career. He lived in London for 10 years, touring as a member of an improvisational comedy group and playing minor roles in more than 25 films, including The Empire Strikes Back, Superman and Ragtime. During his audition for Cheers, he suggested creating a talkative “know-it-all” character, which led to his casting as mail carrier Cliff Clavin, constantly spouting trivia to fellow bar patrons, always dressed in his postal service uniform. He has been featured in every Pixar movie released since 1995, voicing the animated characters Hamm the piggy bank in the original Toy Story and two sequels, the Abominable Snowman in Monsters, Inc., Mack Truck in Cars, the waiter Mustafa in Ratatouille and construction foreman Tom in Up. He is slated to continue performing in the corporation’s future films.

He is still seen on television. He performed on Dancing with the Stars in 2007. From 2004 to 2008, he produced and hosted the Travel Channel documentary series Made in America, learning how everyday items are made. He wrote a related book about the series, We’ve Got it Made in America: A Common Man’s Salute to an Uncommon Country.

He is engaged in a number of social issues, producing environmentally conscious packaging materials as a co-owner of the company Eco-Pack. He co-founded Nuts, Bolts & Thingamajigs, a foundation aimed at encouraging young people to explore careers in manufacturing. He is involved in the nationwide Mobile Outreach Skills Training program. Additionally, he has worked to raise awareness of juvenile diabetes.