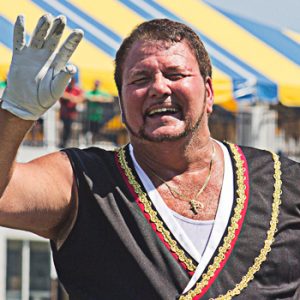 Jim Russo’s drum corps involvement began when he was just seven years old. Over the years, he has been a horn player, drummer and drum major with a number of corps. He served as a marching instructor with a number of groups for more than 20 years. For two decades, he was a marching instructor, administrator and drum major with Hawthorne Caballeros. He is probably best known for his charismatic appearances as the Cabs’ drum major. He has been a judge with the MAA, Eastern and New Jersey judging associations. He has also marched as drum major of the Hawthorne Caballeros Alumni Corps. He was drum major when the Alumni Corps made its first appearance in Canada, during the New Waterloo Band Festival in Waterloo, Ontario in August, 2005. He has also been a consultant with Empire Statesmen, of Rochester, NY.