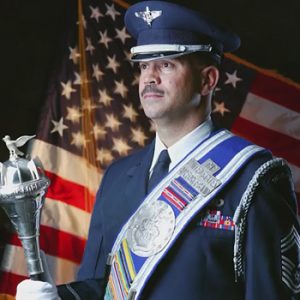 He holds Bachelor of Music and Master of Music degrees from Juilliard School. He is the author of several music instruction books, including Fundamentals for the Pit Percussion Ensemble and The Universal Technique. He served as a committee member for the Percussive Arts Society and adjudicator for the National Judges Association in music, percussion and general effect. He began judging percussion with DCA in 2014.

During 28 years of active duty military service, his highlights as drum major of the United States Air Force Band include conducting and directing more than 6,000 ceremonies involving the world’s highest officials. He also designed the shows for Air Force productions at the 1995 Netherlands National tattoo, the 1996 Scandinavian Tattoos in Norway and Sweden and the dedication of the United States Air Force Memorial in 2006.

He taught the Bayonne Bridgemen percussion section from November 1984 through August 1985 and also marched in the drum line in the 1985 season. In the following years, he was percussion arranger and instructor for Long Island Sunrisers, New York Lancers, New York Skyliners, Santa Clara Vanguard. He was the front ensemble writer for the San Francisco Renegades from 2001 to 2005 and wrote for brass and percussion from 2003 to 2005. The Renegades won the 2006 DCA percussion ensemble championship performing his original composition.

He began his percussion career performing with the Silver Stick Strutters from 1972 to 1976, then moved on to perform with New York Lancers from 1976 to 1981.