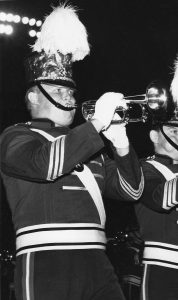 Jim Allen has excelled as an instructor and performer with a number of junior and all-age drum and bugle corps that consistently finished at the top in state and national championship contests. He was visual designer for Syracuse Brigadiers from 1997 to 2007. In that period, the Brigs won the Drum Corps Associates (DCA) title five times: in 1997 and four years in a row from 1999 to 2002. He was also responsible for visual design with both of Rochester’s national-caliber corps: Empire Statesmen in 2008 and 2009 and the Crusaders in 1971 and 1973 and again from 1980 to 1983. In the 1970s, he was visual designer at various times for Empire State Express of Elmira, Rochester Patriots and St. Joseph’s of Batavia when they won the Canadian Open Championship title. He was also the brass instructor with St. Joe’s and Bayonne Bridgemen during that decade. His lifelong involvement with drum and bugle corps activity began in 1956, when he played soprano bugle with the Dutchtown Ramblers. He played soprano with Rochester’s Ridge Culver Statesmen for three years then was a soprano soloist with St. Joe’s from 1963 to 1970. During that time, St. Joe’s won eight New York State American Legion titles and made the finals in the American Legion and Veterans of Foreign Wars (VFW) national championships four times. He has served as assistant director and director with St. Joe’s and assistant director of American Patrol of Batavia. He judged marching for the New York Chapter of the All-American Judging Association from 1971 to 1974 and with the New York Federation of Contest Judges since 1974. He was the chair of the local organizing committee when the Drum Corps International (DCI) championships were held in Buffalo, New York in 1990 and 1995.